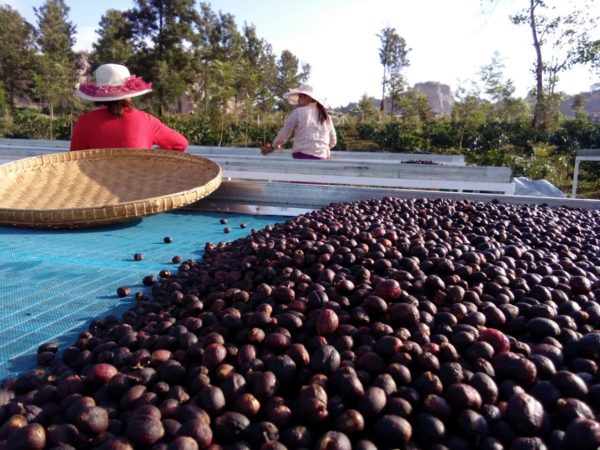 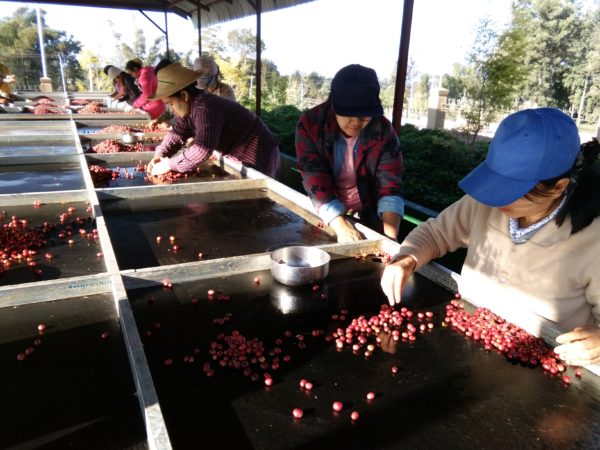 In Myanmar, formerly Burma, smallholder farmers in Ywangan, in the Southern Shan State, began growing coffee in the early 1980s, as a substitute crop for poppies.

Farmers here typically own a quarter to half an acre, on which they intercrop a few varieties of Arabica coffee with crops such as avocado, jackfruit, jengkol beans, papaya and shady macadamia trees.

This coffee comes from the Mandalay Coffee Group (MCG), which was formed in 2014 and has 741 farmer members from 28 villages in Ywangan. MCG is located in Pyin Oo Lwin, a town at 1,067 masl, outside of Mandalay. Pyin Oo Lwin, Ywangan and Mogok are the primary areas for Arabica production in Myanmar.

A small amount of coffees at MCG are “dry natural” processed. Cherries are rinsed, floaters are removed and workers remove any bad fruit or stones. The fruit is then spread in the sun on raised beds, turned hourly and covered at night, to protect it from moisture. This drying period takes between 17 and 21 days.

(In 2017, MCG won a national cupping competition with one of its dry natural coffees, which it says scored an 89.58 on the SCA scale.)

Cupping notes: Juicy and clean, with a rich body and notes of blackberry, vanilla and citrus.