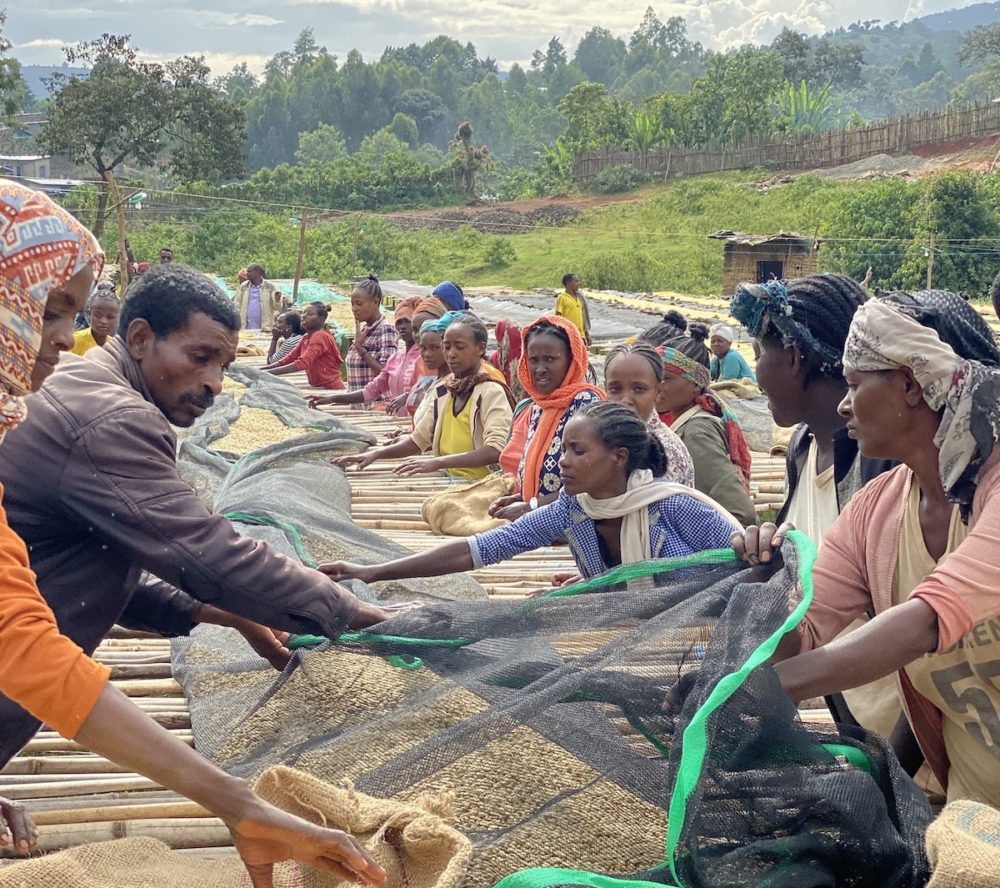 Ethiopia's fresh-crop green coffee will arrive in spring 2020 InterAmerican Trader Ed Kaufmann shares in this edited excerpt from his trip report—along with plenty of good news.

Ethiopia’s coffee supply chains are as nuanced and complex as its celebrated beans. But with ever-changing consumption trends, revamping governmental regulations and climate change creating unpredictable variances in harvest time and yield, having close relationships on the ground is a must, to ensure we can provide our customers with excellent Ethiopian coffee year after year. So, in mid December, InterAmerican CEO Florian Benkhofer and I set off for a week of meetings and visits, in the birth country of coffee.

We spent the first few days in Addis, visiting exporters and cupping with Tsion Taye and Bruck Berhanu, our colleagues in the Neumann Kaffee Gruppe (NKG) Representative Office there.  We had great meetings with some really top-notch, well-established shippers, and we learned that the crop this year is delayed due to unseasonal rains. 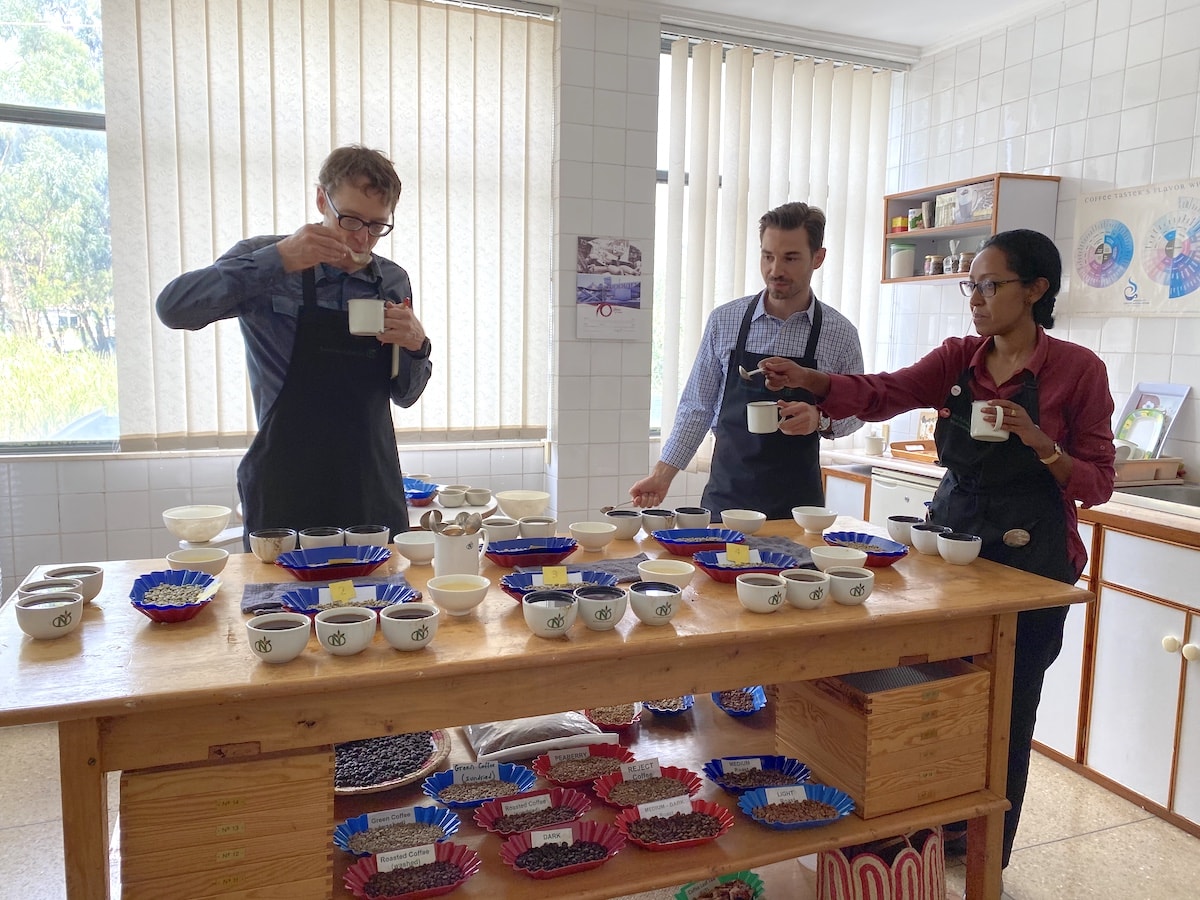 Not only has this caused problems with the timely maturation of fruit on the trees, it is also causing shortages of ripe cherry to the wet mills and a shortage of cash to the producers. As a result, some wet mills hadn’t even opened for the season, and some smallholder producers were stripping their trees and selling the cherry on the internal market, to generate quick, much-needed income.

Consequently, prices for ripe cherry at the wet mills were at a record high. It’s still early in the season, but the first deliveries of coffees to the ECX (the Ethiopian Commodities Exchange) were selling at high prices. This may or may not level out as the season progresses.

Last year, we purchased coffees from the Konga Farmers Cooperative, which is one of 28 cooperatives in the Yirgacheffe Coffee Farmers Cooperative Union (or, YCFCU). During this visit, we learned that, for various reasons, the YCFCU still had 2018/2019 crop, in parchment, from the Aramo cooperative. We blind cupped it on a table with other offerings and were beyond excited to find that the quality was still outstanding. So, understanding how (literally) late-to-the-table Ethiopia’s 2019/2020 crop will be, we purchased two containers of Aramo—one for the East Coast and one for the West—and they should arrive in mid February. 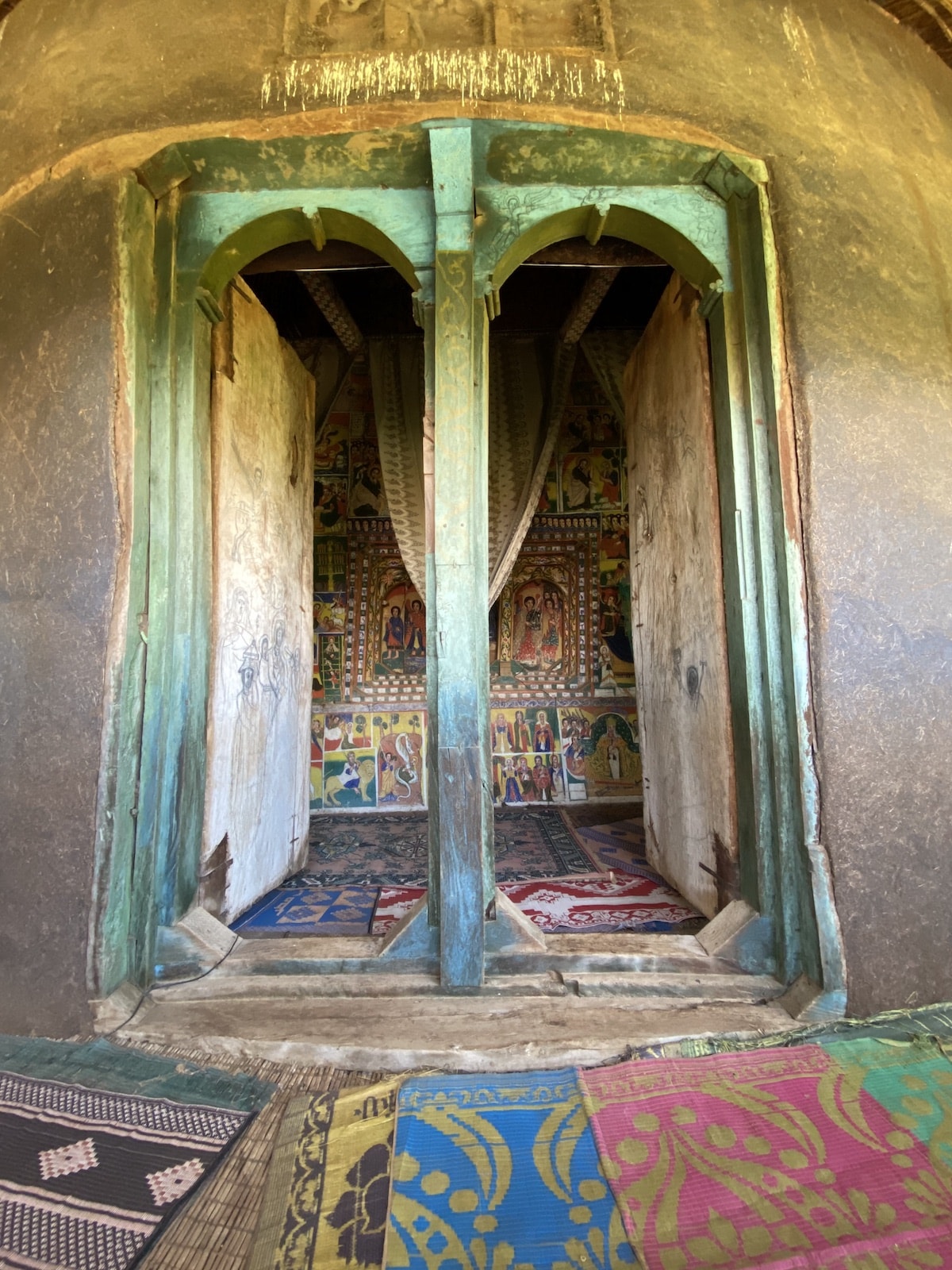 Zege Peninsula and the Amhara Cooperative

Midweek, we were very lucky to be able to visit the Zege (zeh-gay) Peninsula in Lake Tana, in the north.  It was a quick flight to Bahir Dar and then a 30-minute boat ride to the peninsula. People have lived in this area for thousands of years, and it feels very peaceful. There are monasteries from the 14th century and coffee growing wild in the forest.  Some of the inhabitants are monks.

And while we were able to hike on the island, and our guide, Menelik, even hosted us in his home with coffee and the best shiro of our entire visit (a chickpea spread served with injera bread), the highlight of Zege was that contains one of the 23 coffee cooperatives that make up the new Amhara Coffee Farmers’ Cooperative Union in the area around Lake Tana. And, the Union has the very first female head of a union: Mare (pronounced MAR-ee) Getenet. For now, the co-op is only processing naturals, and the quality is solid. 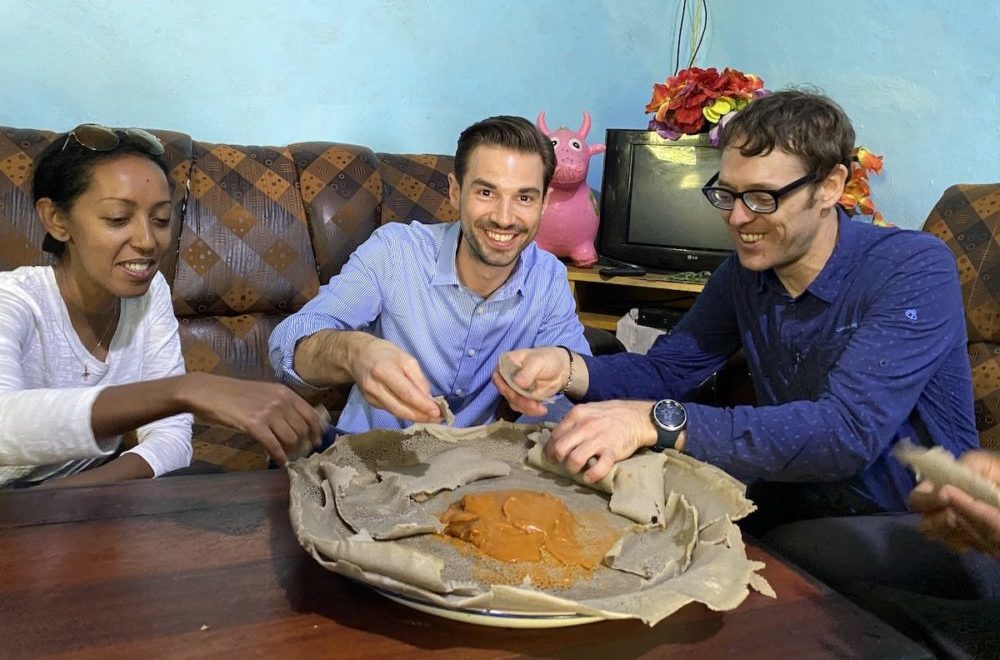 Being treated to outstanding shiro and injera on Zege Peninsula.

The cooperative on Zege is currently producing only modest amounts. Our colleagues in the Neumann Gruppe has been supporters of these coffees, and we hope to join them in purchasing in the late spring, as coffee becomes available.

Back in Bahir Dar, we also visited an office of Hanns R. Neumann Stiftung (HRNS), which is in the area to help the Amhara Union get on their feet as a new union and to promote initiatives related to gender equity and sustainability. By August 2023, their goal is for producers to see a 40-percent increase in their productivity, per hectare. (Daily Coffee News actually wrote about this the week before we were there!)

Back in Addis Ababa, we met with the running legend Haile (HI-lee) Gebrselassie—a two-time Olympic Champion, four-time World Champion and holder of 27 (!) world records. The Ethiopian government gifted him land in the SNNP (in the Shaka Zone), to honor his running accomplishments, and he turned it, in part, into a coffee farm with 46 separated, identifiable blocks (it also includes 200 hectares of forest conservation land).

We were fortunate enough to taste some of the naturally processed coffee from his farm—in blind cuppings—and some of us found it to be our favorite coffee of the trip. We enjoyed our meeting with Haile very much, and we’re really hoping to showcase his coffee this season.

We’re big fans of this family-owned group and have purchased coffees from them—both grown by local smallholders and grown by them on their organic farms—for a few years. We were also lucky enough to have Kenean Dukamo, the son of the founder, Asefa, as an intern in our San Diego office last summer—an opportunity that helped us to really get calibrated and to share the types of styles and qualities we’re really after.

The day we visited Daye Bensa, in Bensa, Sidama, Dana Andrews—a trader on our San Diego team—joined us with a group customers. They had a great little reunion, and it was cool to see Kenean helping more with the family business and bringing new perspectives and clarity to the farm, as to what U.S. specialty roasters are looking for in their coffees.

The Daye Bensa team is the definition of relationship coffee—they work closely with their “outgrowers,” as they call them, and are all about paying premiums for quality and nurturing those relationships—they’ve even helped hundreds of local producers to set up their first bank accounts. And of course, we’re happy to nurture our relationship with them and maintain the routine of bringing our customers these coffees that we know are traceable, a great value and total standouts on the cupping table. We are very excited to bring in Shantewene coffees again this season! 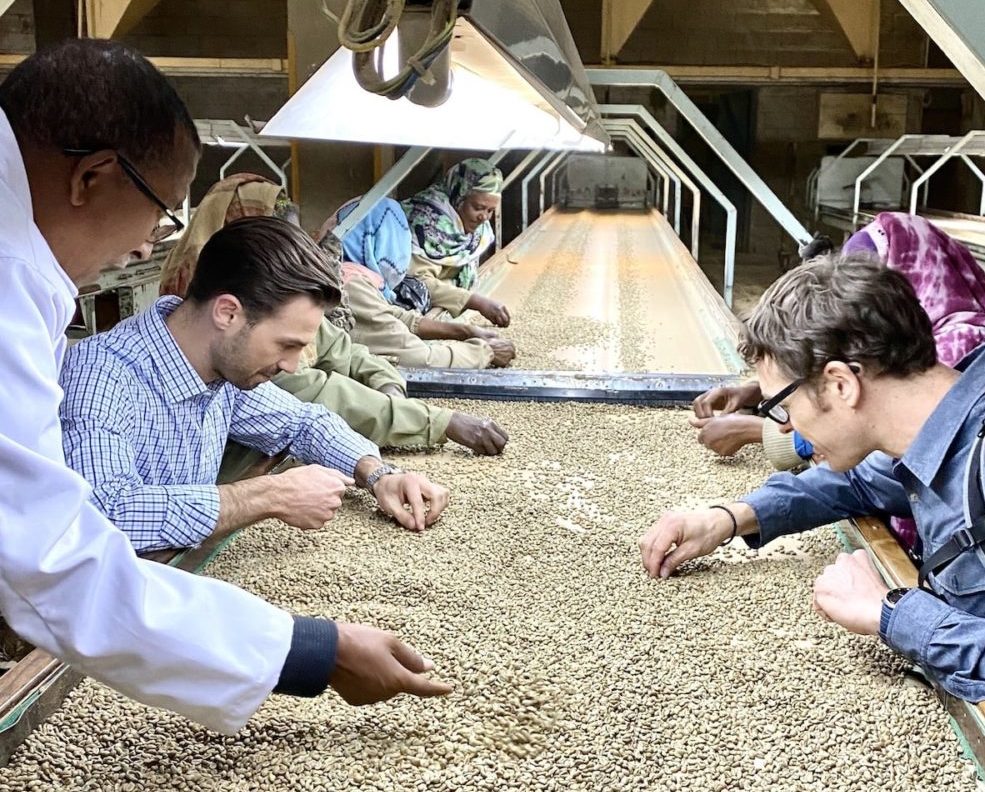 Getting schooled at the Horizon coffee processing and warehousing enterprise (CPWE).

Among other exporters and friends, we were thrilled to spend some time with Abdullah Bagersh, who InterAmerican has been working with for nearly two decades, buying his beloved Misty Valley — a coffee that has necessarily evolved over the years, in keeping with political regulations, but that always delivers the same incredible cup profile: homemade blueberry pie!

We’re looking forward to both his 2019/2020 Misty Valley, and his earthier Mokamba, arriving in late spring. Which should coincide with fresh crop Ayehu, from the Amhara Region, through Horizon/Ethio-Agriceft—a private company that offers traceable and certified coffees and supports some great farmer projects, like beekeeping and income diversifying with spices.

As we wrapped up our week with a few goodbyes, we felt very positive about the visits and meetings we had. Our Representative Office there is doing amazing work, and we’re thrilled about the relationships we forged and furthered. Heading into what could be an unusual year for Ethiopia, we’re excited to be aligned with some of the most prominent shippers in the country and look forward to working together over the long term. •

—
Ed Kaufmann is a trader in InterAmerican’s Hoboken, N.J., headquarters. He joined the team in May 2019, after years as a roaster and green buyer (and InterAmerican customer).