Forca Cafe Is a Story of Brazil In Three Parts 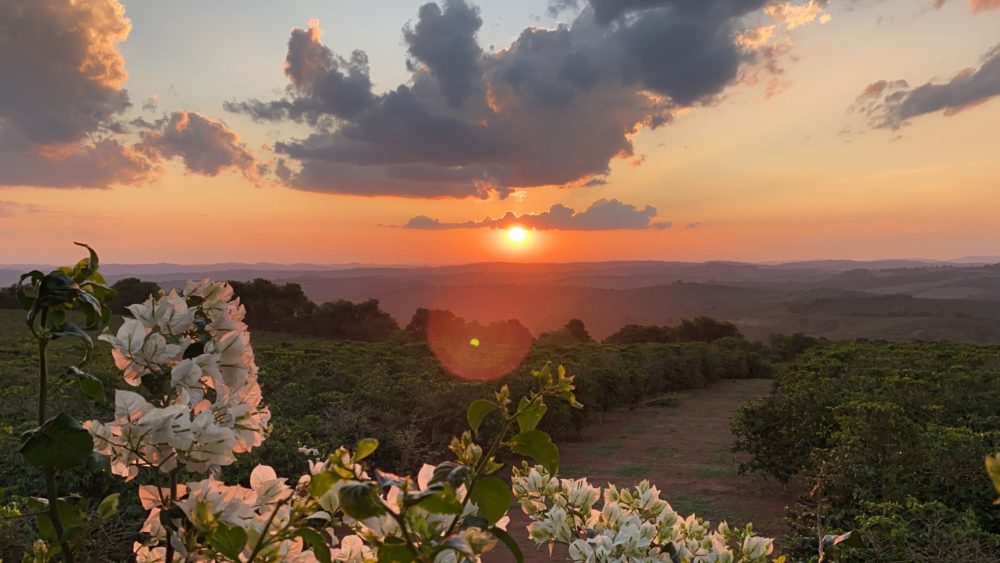 In 2003, NKG purchased the farm from the Paiva family, which was gifted the land seven generations earlier by the Portuguese crown, and today it's still co-managed by Joaquím Paiva—a tall, slim, long-limbed coffee producer, who as a young man left Lagoa for a time to play professional basketball alongside Brazil’s beloved Oscar Schmidt.

Since the purchase, Lagoa has been expanded from 2,640 hectares to 3,712 hectares (more than 9,100 acres), roughly half of which is dedicated to coffee. The other half is preserved native forest. Connected swaths hug the perimeter of each coffee field, together forming a 1,407-hectare bio-corridor that enables animals to travel the length and width of the farm undetected. When a conservation group recently placed motion-sensitive cameras in the forests, the Lagoa staff was startled to learn that they shared their home with not only incredible numbers of bird species, raccoons and armadillos but also significantly sized pumas.

Intensely green, meticulously groomed, and with rolling hills that stretch, from many vistas, for as far as the eye can see, the farm is, very literally, a model of efficiency. In the out-building where fertilizers, nutrients and agro-chemicals are stored, meticulous logs note the use of each regulation-specific protective garment; after exactly 30 wears and washes, the garments are disposed of, to ensure the health of workers, who each year undergo multi-day training. And to still further ensure the workers’ good health, everyone is trained and rotated across tasks.

The farm’s nursery, home to 320,000 seedlings, is also run with science-lab precision. Its experiments with “jumbo plants”—seedlings nestled in larger-than-usual bags and more soil—have yielded results that the farm happily shares with smallholders and interested neighbors. While traditional plants yielded fruit in 2.5 years, the jumbo plants are producing in 1.5 years. And, as larger seedlings when they arrive in the fields, they have more developed root systems and are more drought resistant. 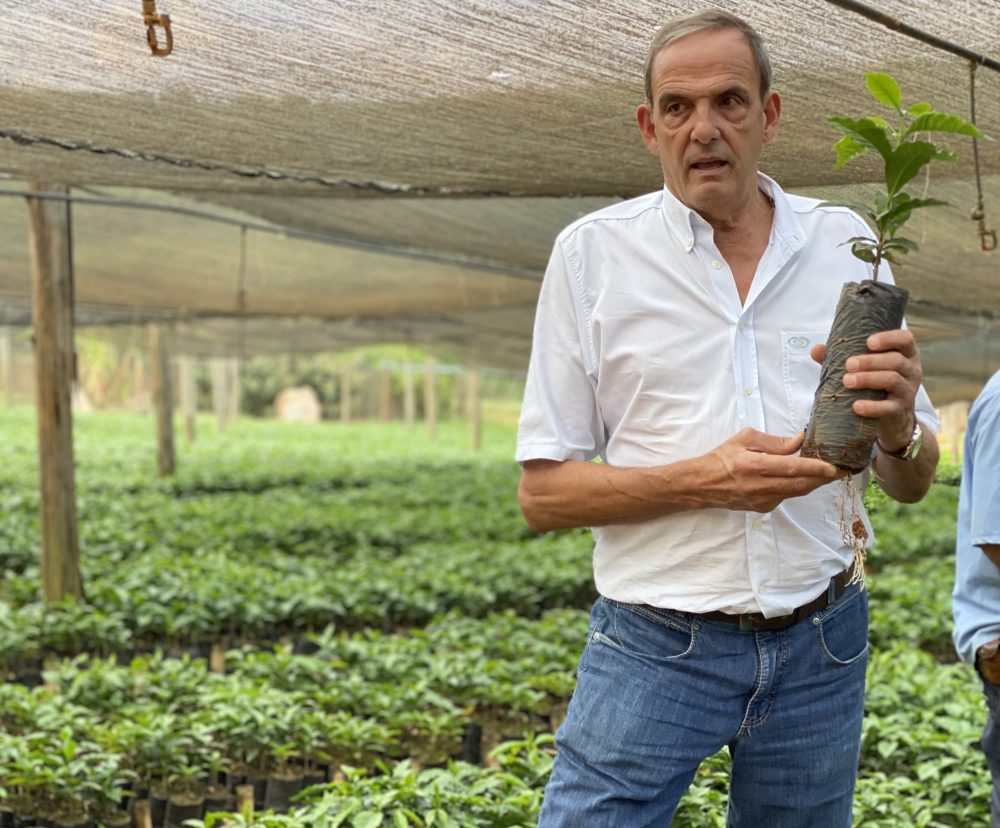 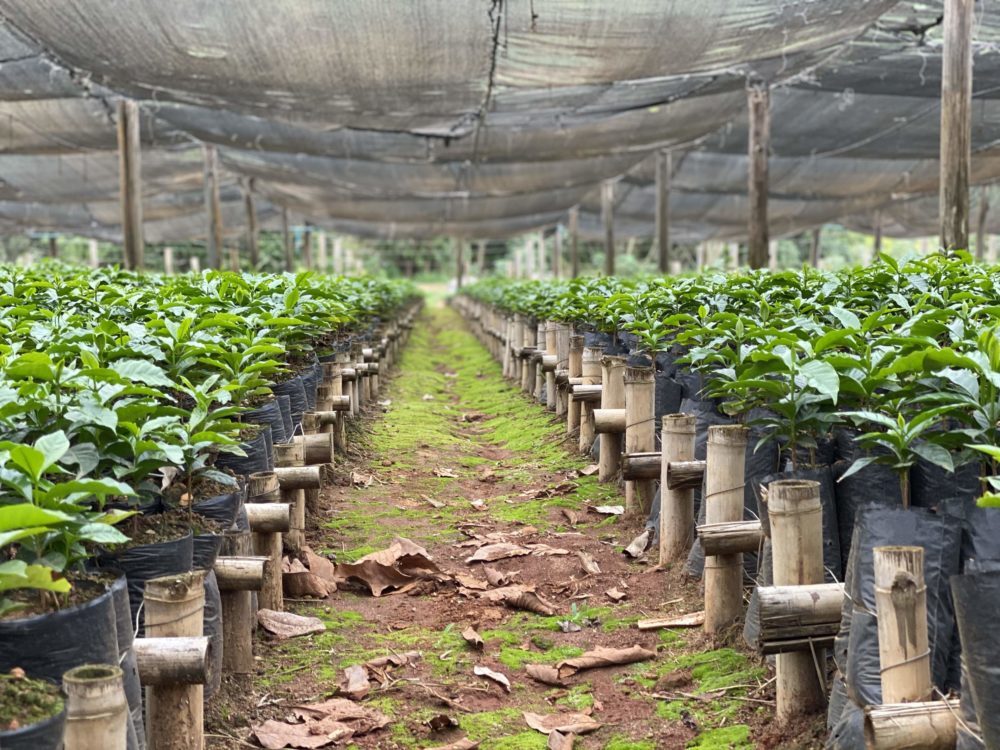 Once in the field, seedlings also benefit from the surrounding forests, whose feathered residents are natural predators of leaf-attacking bugs such as leaf miners. (One bug can lay 300 eggs a week; 300 bugs can devour a plant in a month.)

Extensive measures are also taken to collect, treat and ensure the purity of all water used on the farm. Fazenda da Lagoa means “the lake farm”—a nod to the 66 underground springs that are the single water source for all 3,712 hectares, as well as for Santo Antônio do Amparo, the nearest big town and home to most of the farm’s nearly 250 full-time workers. Currently, 21 workers and their families live in the 23 homes on Lagoa, many of which include gated areas where the families can keep animals and maintain private gardens for their own consumption.

As a physical representation of two celebrated coffee families, it is little surprise that Fazenda da Lagoa operates as a true steward of the land and its resources, encouraging the farm toward its fullest potential, serving as a model and education source for the larger community, and offering an office to the Brazil team of Hanns R. Neumann Stiftung (HRNS), the independent coffee nonprofit founded by Michael R. Neumann and his family. 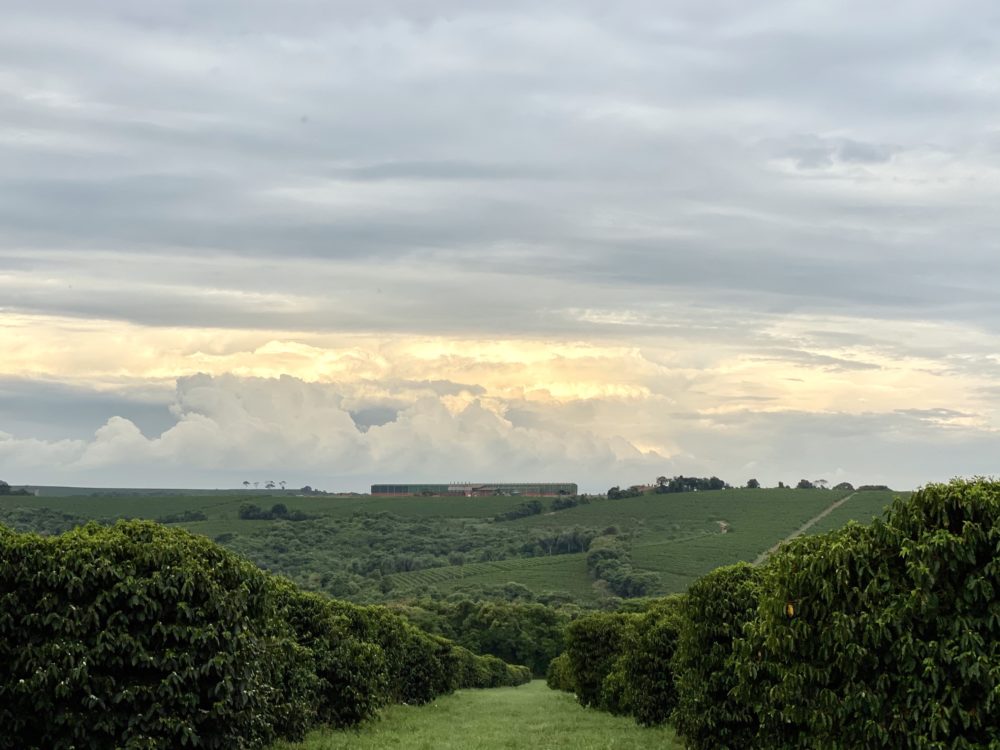 On Fazenda da Lagoa, a view of the mill from a coffee field.

—
HRNS do Brasil was founded in 2007, with a mission to create practical sustainability experiences: improving farmers’ access to services, training and markets; introducing agricultural practices that can increase farm productivity; and helping to increase farming families’ incomes and quality of life.

In its first phase, the program entered one municipality, engaging 350 families; in its second, it grew to seven municipalities and 1,650 families. Today, HRNS do Brasil is in 17 municipalities, positively impacting more than 6,000 coffee-farming families.

In the world’s largest coffee country, and a nation known for its vast farms and impressive mechanization, the HRNS team quickly came to understand the challenges faced by Brazil's smallholder producers—farmers with fewer than 20 hectares, whose primary income is coffee.

In addition to employing agronomists and working with producers on business challenges such as budgeting and data-based decision making, HRNS has begun offering assistance in succession planning. Young people leaving family farms for opportunities in cities had been a major challenge that families often aren't sure how to address. HRNS, in partnership with Serviço Nacional de Aprendizagem Rural (SENAR), Casa da Criança and Fazenda da Lagoa, developed a (now more-widely deployed) three-month training course that walks both generations through exercises such as creating an historical assessment of a farm, identifying areas of investment, outlining the process of transition, and addressing the full financial and psychological ramifications of succession. 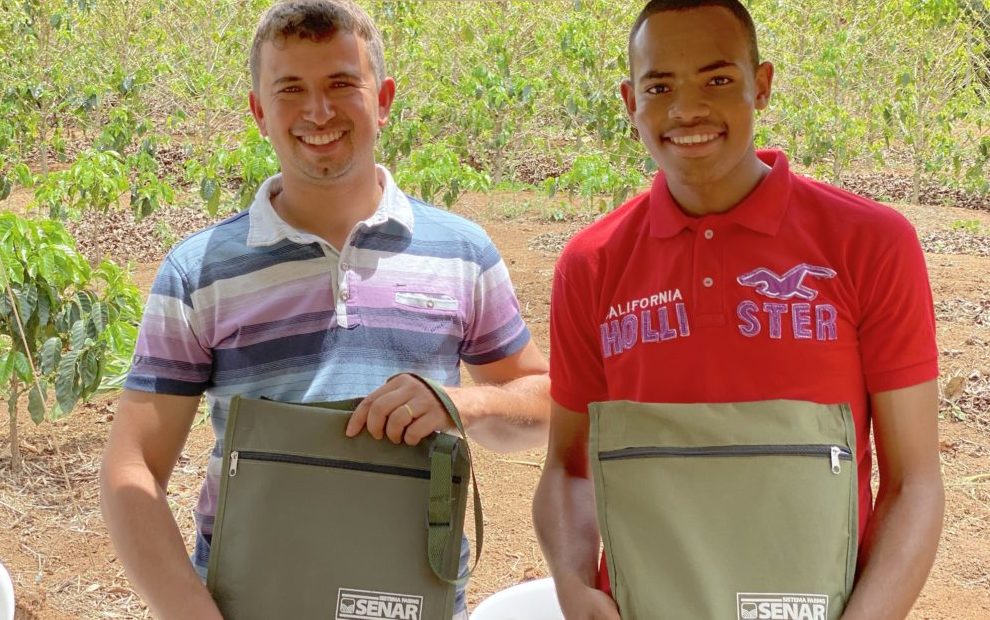 Uender Oliveria Peixoto, a 19-year-old participant in the program, shared that his father was initially skeptical but ultimately really appreciated the training and its importance for their family. Uender also completed the program with three clear goals: To learn English, to learn to cup coffee and to remain on his family’s farm and continue in coffee.

In 2014, the HRNS do Brasil team was challenged to develop a way to not only assist producers but to help sell coffee. They developed the idea of a contest to celebrate the best smallholder lots, followed by an online auction through which buyers around the world could bid on the lots. It was a way to shine a needed spotlight on coffees that were increasingly the result of farmers following the advice of HRNS agronomists, doing everything right and producing the best coffees of their careers—and still facing low prices.

On Oct. 21, 2019, an international group of NKG importers, exporters and customers convened on Fazenda da Lagoa to cup the nearly 180 samples submitted to the Sixth Annual Força Café Competition, and on Friday, Oct. 25, 10 winners were announced in the respective categories of Semi-Washed Coffees and Natural Coffees.

On Dec. 17–19, those 20 winning coffees will become available through a three-day auction. (Details for participating are in the footer of this article.) 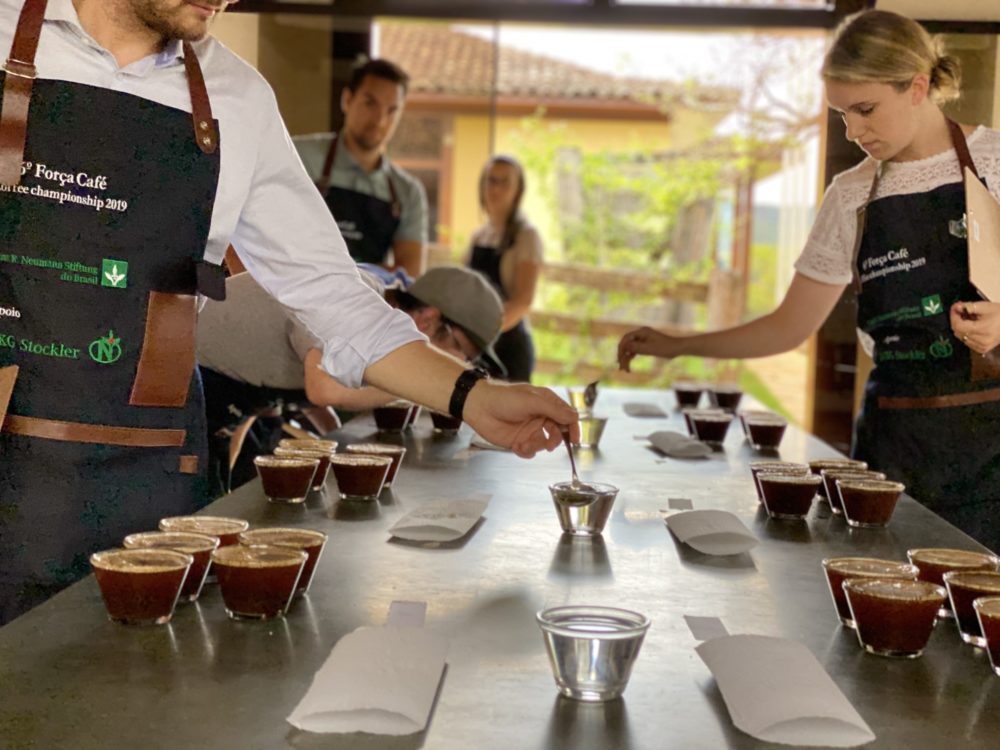 —
Casa da Criança (“House of the Children”) was founded by Jose Carlos Avelar in the 1980s, as a place to support children from poorer communities in Santo Antônio do Amparo.

In the 1990s, Abigail Leite Valadao, a local woman and eventually the town mayor, took an active role in Casa da Criança and funded a construction project that expanded its footprint from a tiny home to a larger space where carpentry, cooking, music and handicraft courses could be held for children and their families. Beyond the classes, Casa da Criança provided food and activities that were a critical support system for working families. But it struggled with funding.

Casa da Criança had been closed for 10 years, when in 2014, Fazenda da Lagoa hosted “O Mundo do Café,” an art contest that encouraged local children to paint scenes of coffee life—lives most of them and their families lived. The contest was a success, most importantly because it gave the Neumann Gruppe an immediate view of the community’s need for resources for its children and young people. And it led to the re-opening of Casa da Criança. 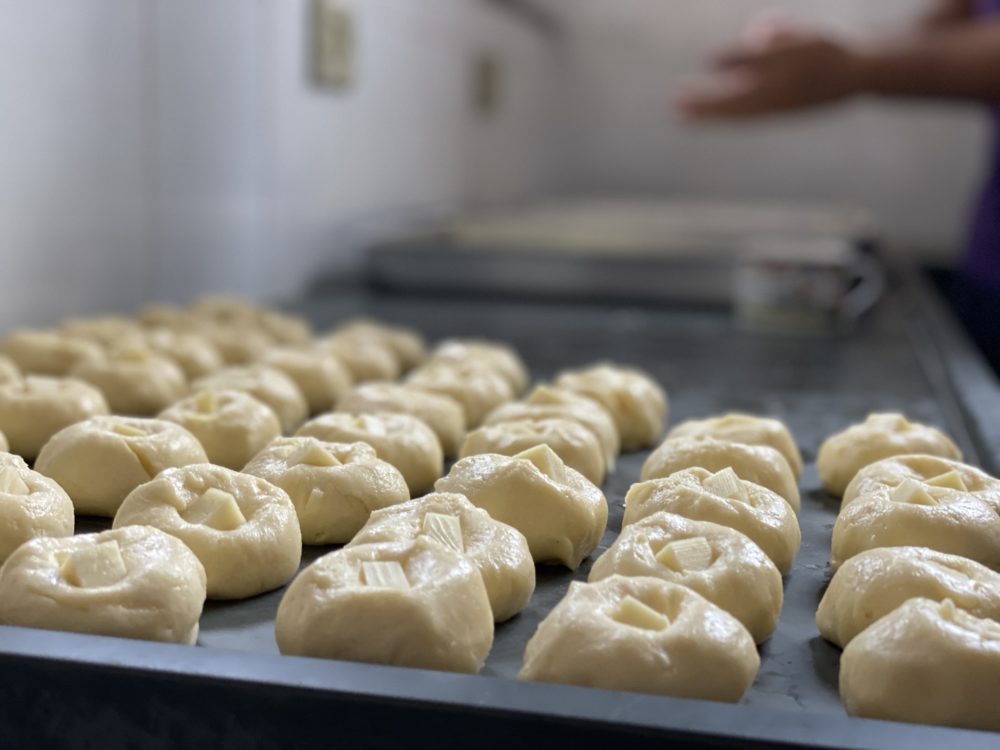 The Neumann Gruppe, along with HRNS, helped fund the reopening of Casa da Criança e do Jovem Amparense (“House of the Children and Youth of Amparo”) with a mission to help prepare young people—socially and vocationally—to become healthy, active members of their community.

Francyelly Lasmar and Patrik Avelar Lage are now on Criança’s executive board, as representatives of Fazenda da Lagoa, and Elio Cruz and Denis do Nascimento are HRNS Foundation representatives who serve as the financial director and Fiscal Council member, respectively.

Fabrizio Martins, a local volunteer, is director of operations. When the 2019 Força Café judging team recently arrived for a visit, he was in the kitchen chatting with a boy of 7 or 8 and rolling squares of cheese into a dough for pao de queijo, a heavenly specialty of Brazil.

“This neighborhood is very big and very poor. We take kids from the streets and give them activities to do and a place to be,” Fabrizio explained later, over cake, coffee and plates of the warm cheese rolls.

“The boy who was in the kitchen with me—he was being used by criminals to transport drugs. Now he participates here.” 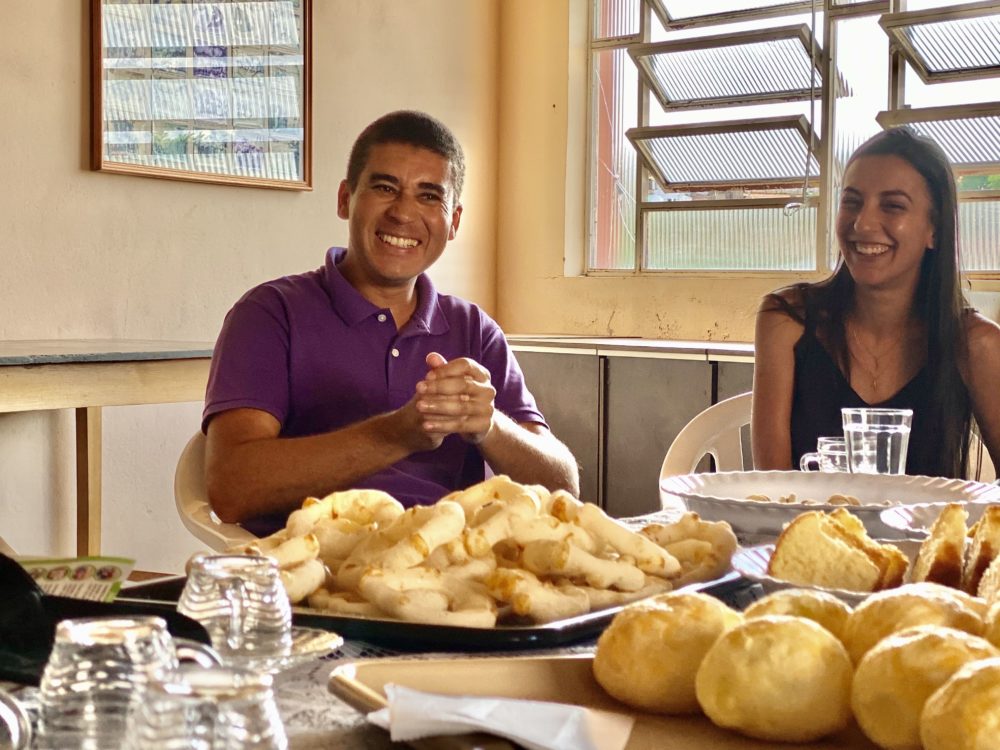 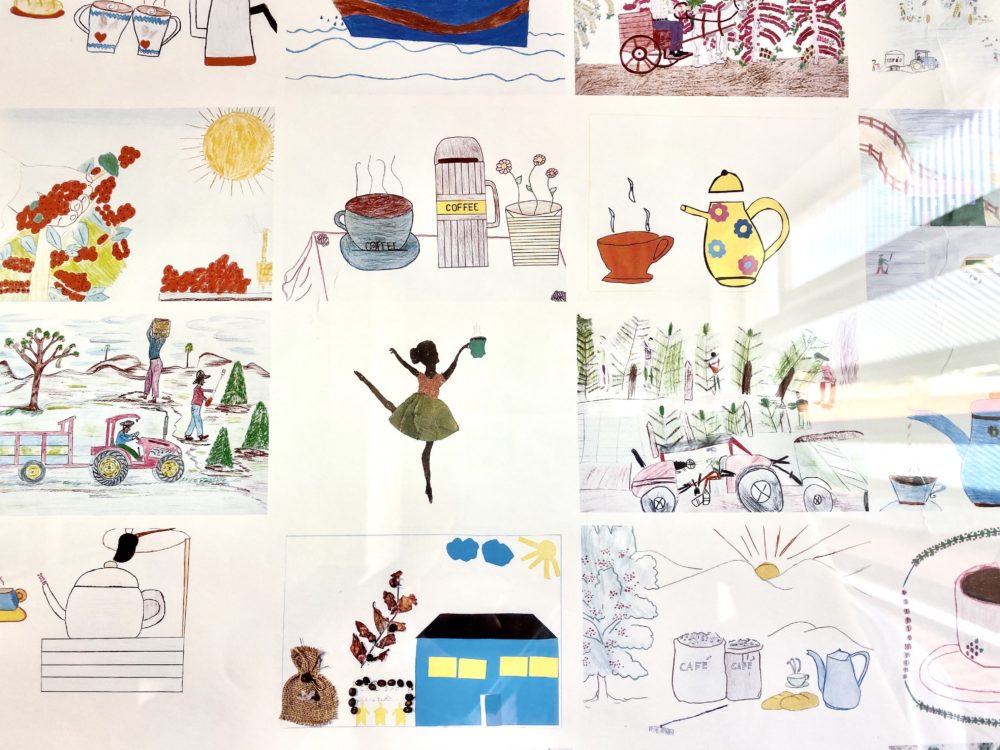 Submissions to the “O Mundo do Café” painting contest, hosted on Fazenda da Lagoa in 2014.

In addition to recreational activities for children, Casa da Criança offers long-duration classes such as Mechanization (training young people to fix tractors and other machines, which takes place on Fazenda da Lagoa), Rural Administration, Computer and Software and Music, as well as short-term classes including Tractor Driving, Handicrafts Manufacturing, Coffee Cuisine and Caretakers for the Elderly. The cost for 16 hours of Weed Machine Operation and Maintenance training, for example, is the equivalent of $50 US. A 40-hour Bakery course is $266.

Fabrizio shared stories of two young women who saw their only options as prostitution or drug trafficking.

“One of these girls took the Caretaker class, and now she earns two salaries and is very happy,” he said. “The importance of the house to the community can’t be overstated. Every dollar really changes lives.”

During the Força Café auction, every coffee that wins a top-10 spot and a place in the auction is purchased at an above-market price by Stockler, InterAmerican’s export sister company in Brazil. Additionally, during the online auction, any price that’s paid above what Stockler paid goes directly to the farmer. And further, after winning a coffee, roasters can elect to include a $0.10-per-pound premium, which goes entirely to Casa da Criança.

Last year’s auction collected nearly $4,400 for the house—a portion of which purchased mats for the floor of the Taekwondo studio.

During a tour of the house, Fabrizio pointed out an elementary school–age girl who has played violin with Brazil’s national orchestra, and a 14-year-old girl who has won state-level championships in Taekwondo. 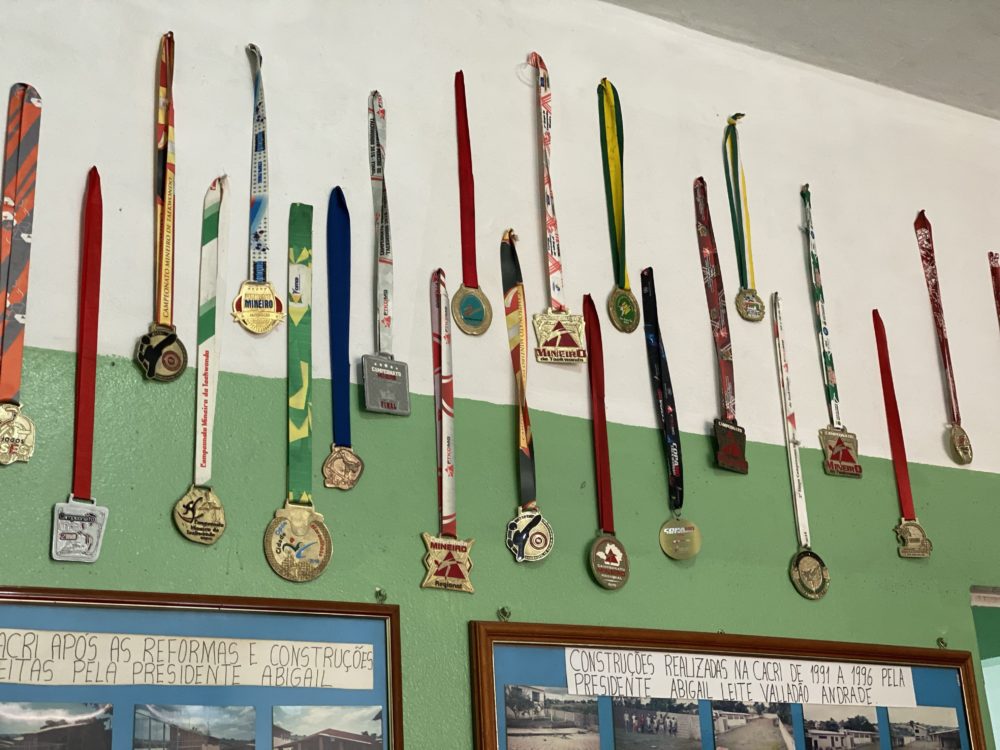 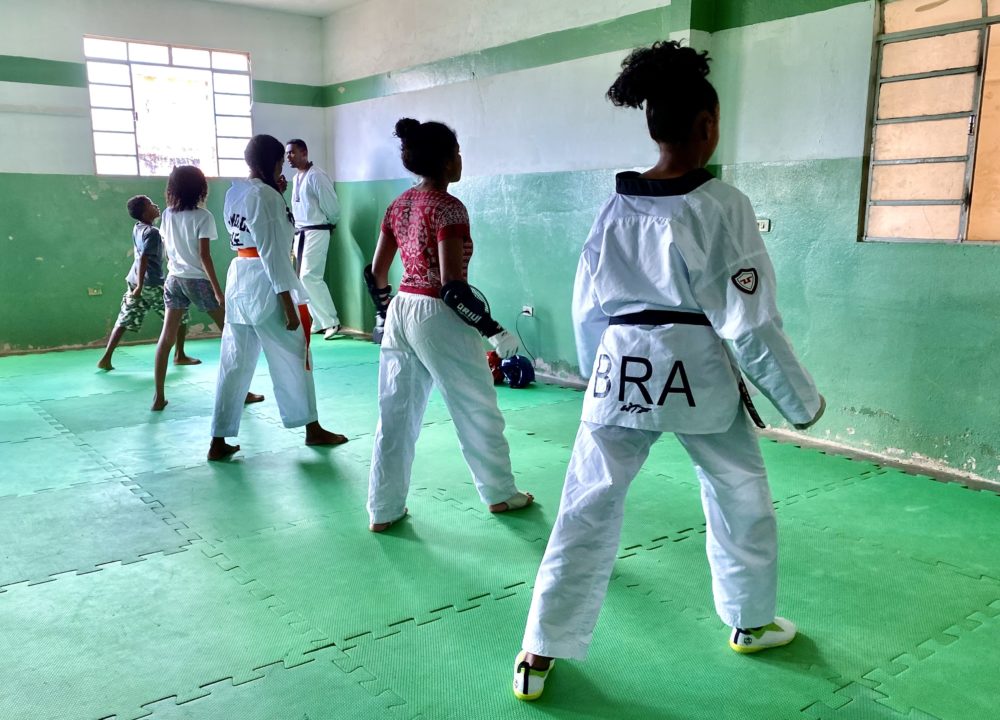 Casa da Criança's taekwondo program has placed three athletes on Brazil's national team and one may compete at the next Olympic games.

Edmárcia Lelis Barbosa has post-graduate degrees in organizational psychology and clinical and institutional psycho-psychology and runs the house’s programs, deals with its administrative needs and offers support to the children and their families. Her goals for 2020 include welcoming more partners who can offer funding and opportunities.

“The more projects that can be developed, the more adolescents and children we can support, giving them the opportunity to grow socially, personally and financially,” she said through a translator.

Last year, thanks to a $2,000 donation by InterAmerican Coffee, a group of the house’s taekwondo students were able to compete in a national competition (the money paid for airfare, hotels and travel expenses they otherwise couldn’t afford) where one young woman won a silver medal and two won bronze. Currently, the house’s taekwondo program has placed three athletes on the national team and one may compete at the next Olympic games. 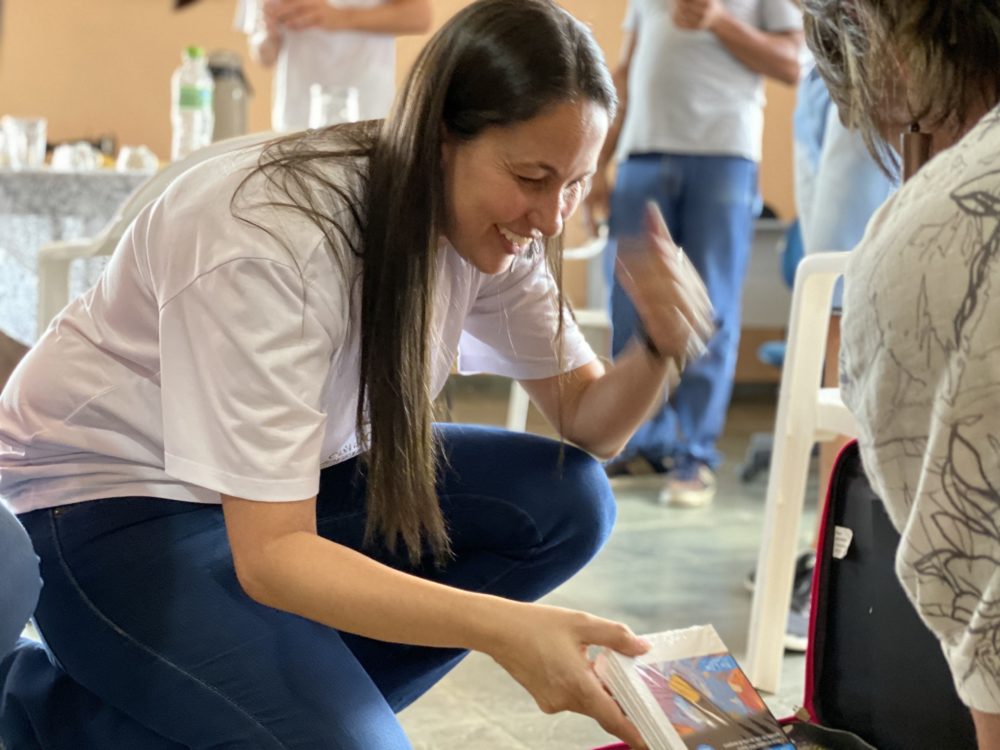 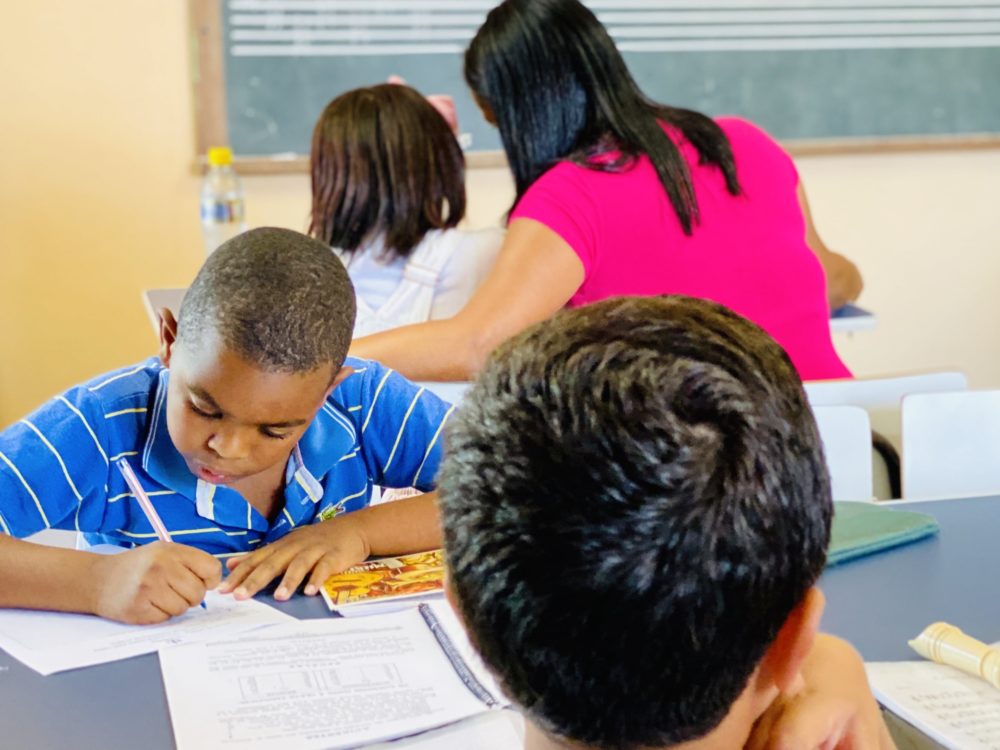 Young musicians in a music class at Casa da Crianca.

“The most satisfying part of this work is to see the development of everyone who participates in the projects at Casa da Criança,” said Edmárcia. “To learn that a young person got a job because of an opportunity to grow that they received here, or to see the smile of a child who knows that she and her family have the assistance they need. That’s what brings me happiness.”

Standing in the courtyard that late afternoon, one was treated to the playful mix of a recorder trio practicing in the music room and the kihap of taekwondo students, as an instructor counted kicks.

"This isn't simply a place for them to spend their time,” Fabrizio clarified, quietly. “These kids are really studying for greatness. They understand—this is their opportunity.” •

—
Several finalist lots from the Sixth Annual Força Café will be purchased by InterAmerican for spot inventory—we’ll share a complete list of finalists and cupping notes soon. On Dec. 17, InterAmerican will also bid for coffees on behalf of roasters; to place a bid, or for more information, please contact your trader or Providence Head of Trading Gerra Harrigan at gerra.harrigan@nkg.coffee.