The Future of Coffee Is in Our Hands: A Recap

Home / News / The Future of Coffee Is in Our Hands: A Recap 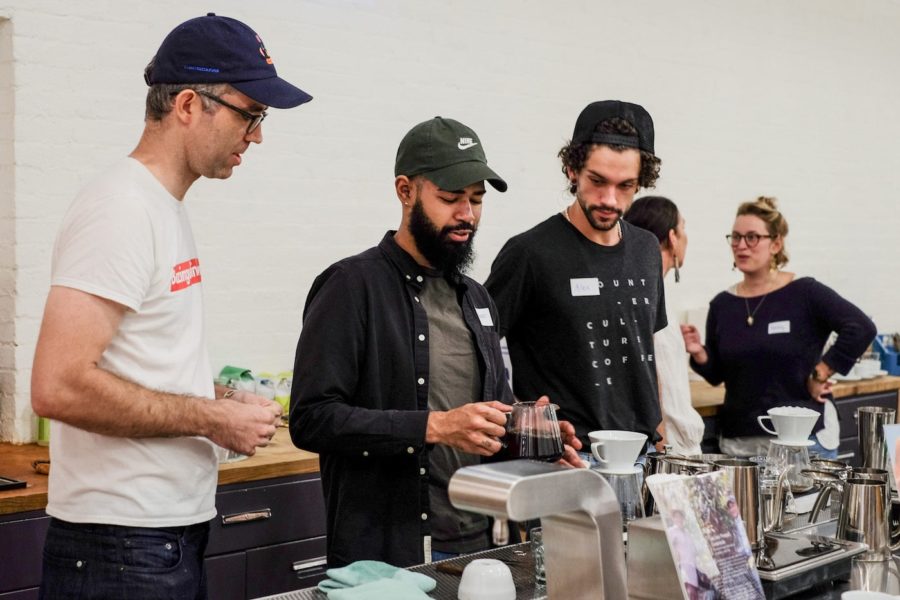 Entering Counter Culture’s Soho training center, for InterAmerican's Sept. 27 Future of Coffee event, was like being immersed in a warm golden hue. All polished wood and clean, comforting lines, the space, like so many New York City businesses, is long and slim. Vintage 1950s GE cabinets line a wall below slate-black countertops, enormous wooden columns mark the length of the space and sleek reclaimed Maple from a factory in Massachusetts now form, wide, blond amphitheater seating where guests soon settled in.

On a middle island, its center covered with sleek gadgets intended to heat, weigh, measure, grind and extrude coffee, three exacting lines of white cups and saucers had been set out across its length. Behind it, two baristas stood carefully measuring beans and swirling long, crystalline threads of water into pour overs.

“Would you like some coffee?” one asked. Despite the lowering sun and dusky hour, most of us agreed, excited to try the special coffees on offer.

One, Guatemala San José Poaquil HRNS, came from Chimaltenango, Guatemala, where the Hanns R. Neumann Stiftung (HRNS) foundation has been working with 1,031 farming families for the past three years. The other, Honduras Coffee Kids Uniocafe, hailed from western Honduras, where Coffee Kids, a program of HRNS, has been working with next-generation producers from the Youth Committee of the Uniocafe cooperative, to improve coffee quality, diversify producer income streams through entrepreneurial activities and deepen producers' knowledge of both agronomy and small business best practices. 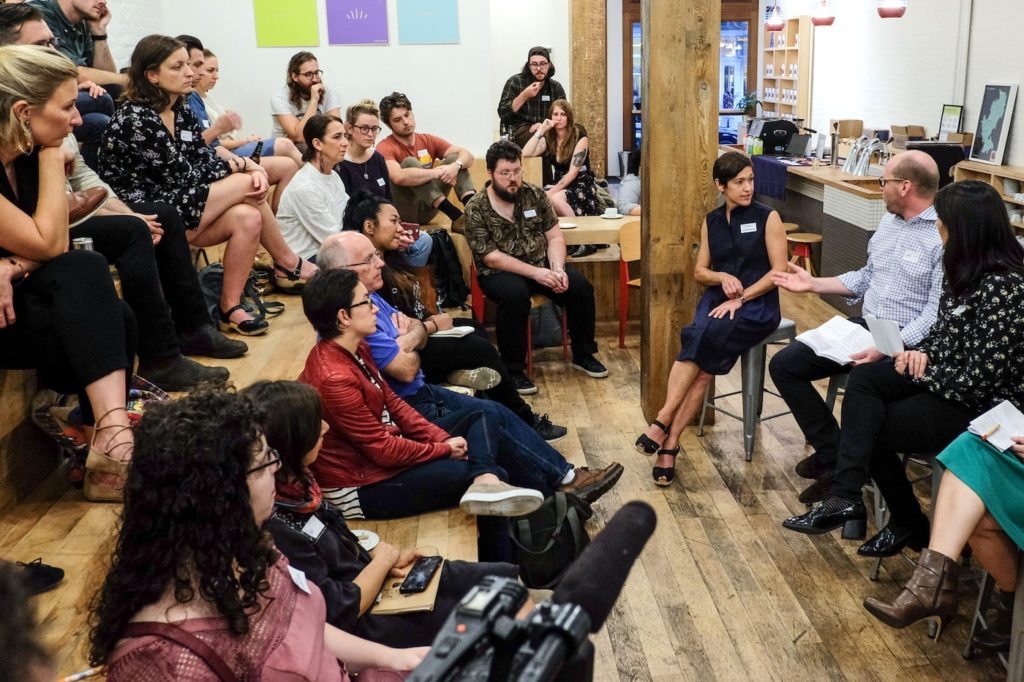 The coffees were also being served in the back of the room as espresso. From my place near the front, I glimpsed a group of happy espresso fans, congregated around a counter as a barista pulled shots. Though soon, all us gravitated toward the benches to sip our coffees—or sparkling wines and beers, collected from a long table set with cheeses and other early-evening snacks.

In the intimate space between the wooden steps and the slick, silver edge of the bar—covered in colorful sticky notes and a variety of handwritings, each asking a question about the coffees or the industry—the evening’s moderator, InterAmerican Head of Marketing Michelle Maisto, sat on a barstool alongside the evening’s special guests: Jan von Enden, managing director of HRNS; Joanna Furgiuele, program manager of Coffee Kids for HRNS; Kate Selengia, program manager of Climate Smart Coffee for HRNS; and Emiliano Rice, a trader in InterAmerican's Providence office. 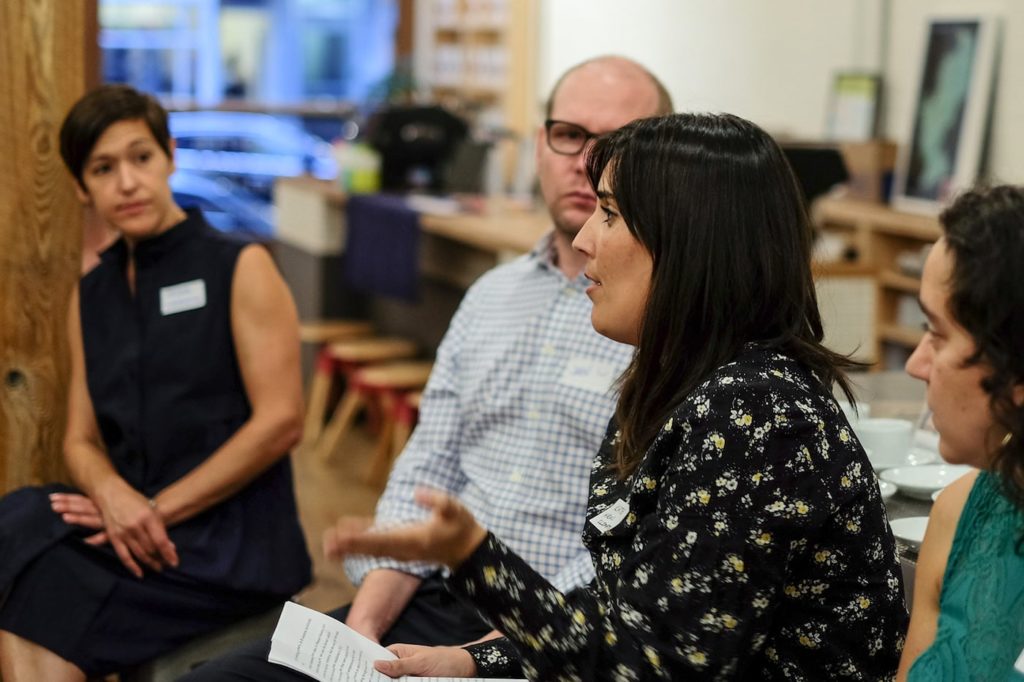 Kate Selengia, program manager of Climate Smart Coffee for HRNS, says it's "not too late to change the future."

Each presenter was asked to offer three takeaway ideas about the future of coffee. Jan, speaking first, offered that “specialty coffee is in danger, but you can do something about it.” Specialty coffee is a small subsection of the wider coffee market and due to their position, small, specialty farmers are some of the hardest hit by a plummeting C-market and other price changes, he explained. But specialty coffee’s fate is not sealed. Through conscious purchasing, educating consumers and supporting project work, we can slow and perhaps reverse the exodus of coffee farmers toward more other agricultural products (or cities) and make coffee growing a sustainable livelihood.

Up next, Kate spoke about la roya, or coffee leaf rust, the fungus that devastated Latin American crops in 2013 and continues to loom over all coffee growers as a profound threat. Roya, she said, was a climate crisis. Warmer nights that allowed la roya to flourish, combined with unusually high winds  spread the fungus quickly, created a perfect storm for coffee trees. Many people talk about climate change as something far in the future, she explains, but roya already is a climate crisis, she stressed. Climate crises are not as far in the future, like we may imagine, but already here. 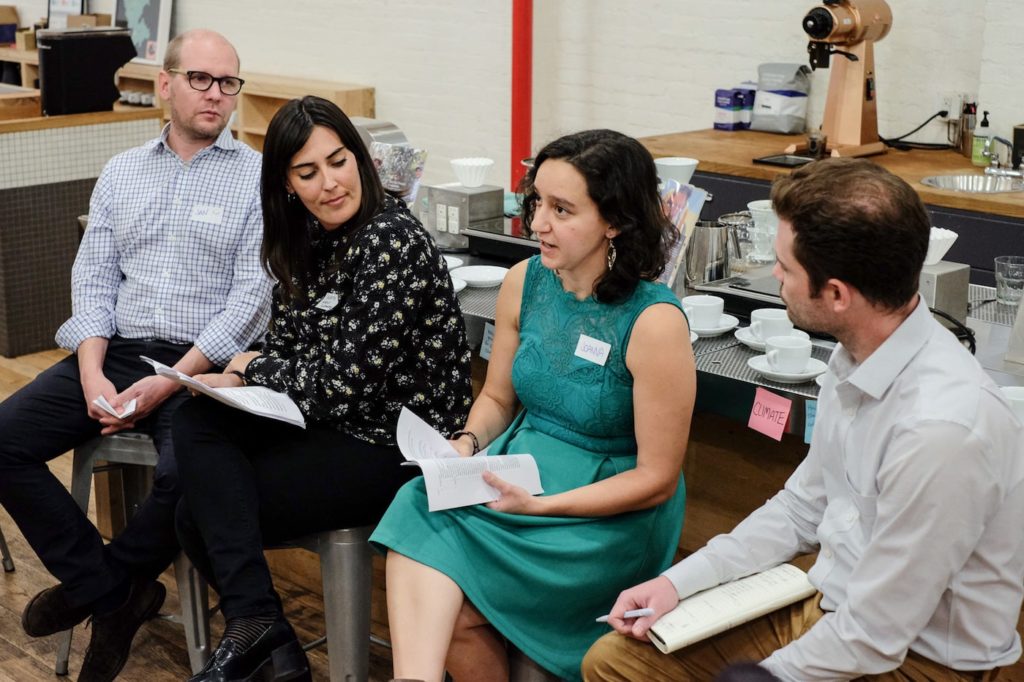 Joanna Furgiuele, program manager of Coffee Kids for HRNS, says we "need to work now with youth between the ages of 15 and 30, when they are looking for opportunities for their future."

“We’ve already had a major climate crisis [in coffee] in the last five years,” she said, “and that’s not going to be the last.”

Joanna, taking center stage next, emphasized that the future of coffee begins with young farmers. The average coffee-farmer age is now mid-fifties. As farmers age, they need younger people to take up the mantel of farming. Though young people, understanding the hardships and small returns of farming, are often opting to try their luck in cities. Those who do take up family land may choose to change to a more reliable crop. If we want to have specialty-coffee farmers in 20 or 30 years, we need to start investing in young people from farming communities, make farming profitable and sustainable, and assist them in diversifying their assets and enhancing their skills. 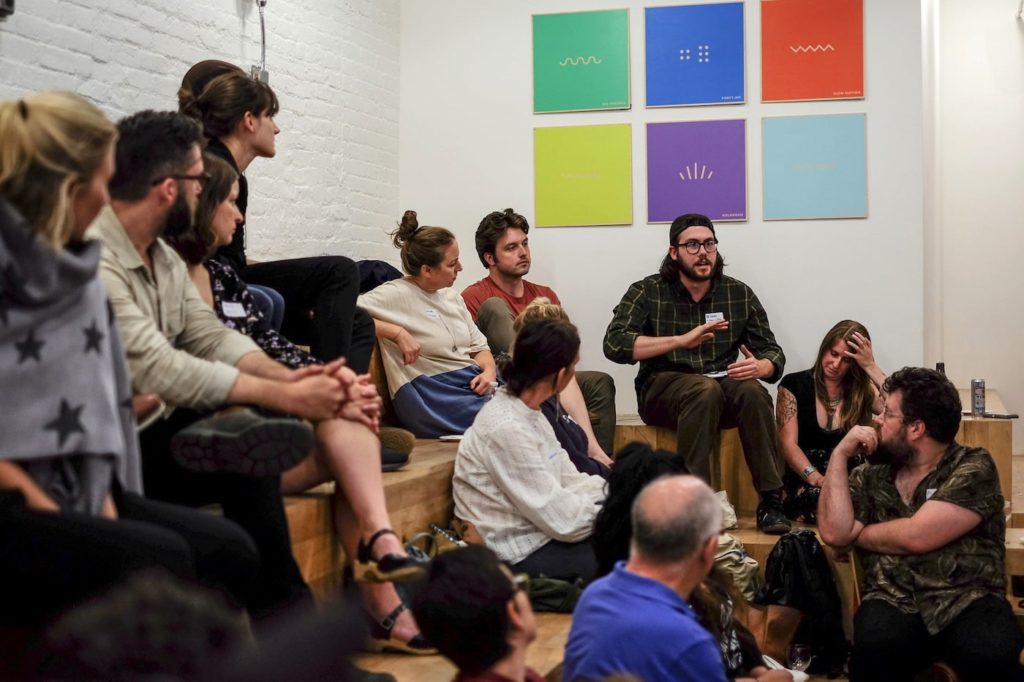 Great questions from the crowd led to good discussions.

Last but by no means least, Emiliano spoke on behalf of InterAmerican. The “C-market isn’t allowing farmers to become empowered and become successful in the global market,” he said, stressing the importance of investing in projects that provide so-called safety nets for coffee farmers as well as certification coffees that guarantee a minimum per-pound price well above the current C market.

(A video of the full conversation is available here.)

As the lively question portion of the evening came to a close, the room buzzed with excitement and enthusiastic reflection. Instead of heading out into the darkened city, most guests moved from the wooden steps to the table still heavy with food and drinks, eager to keep the conversations going. • 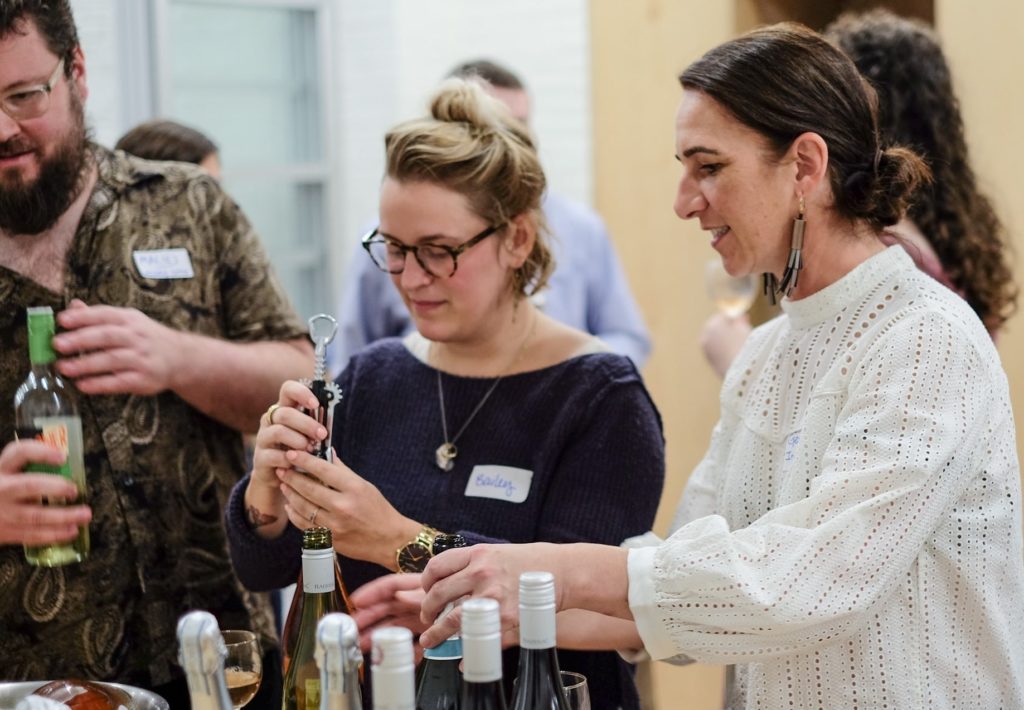 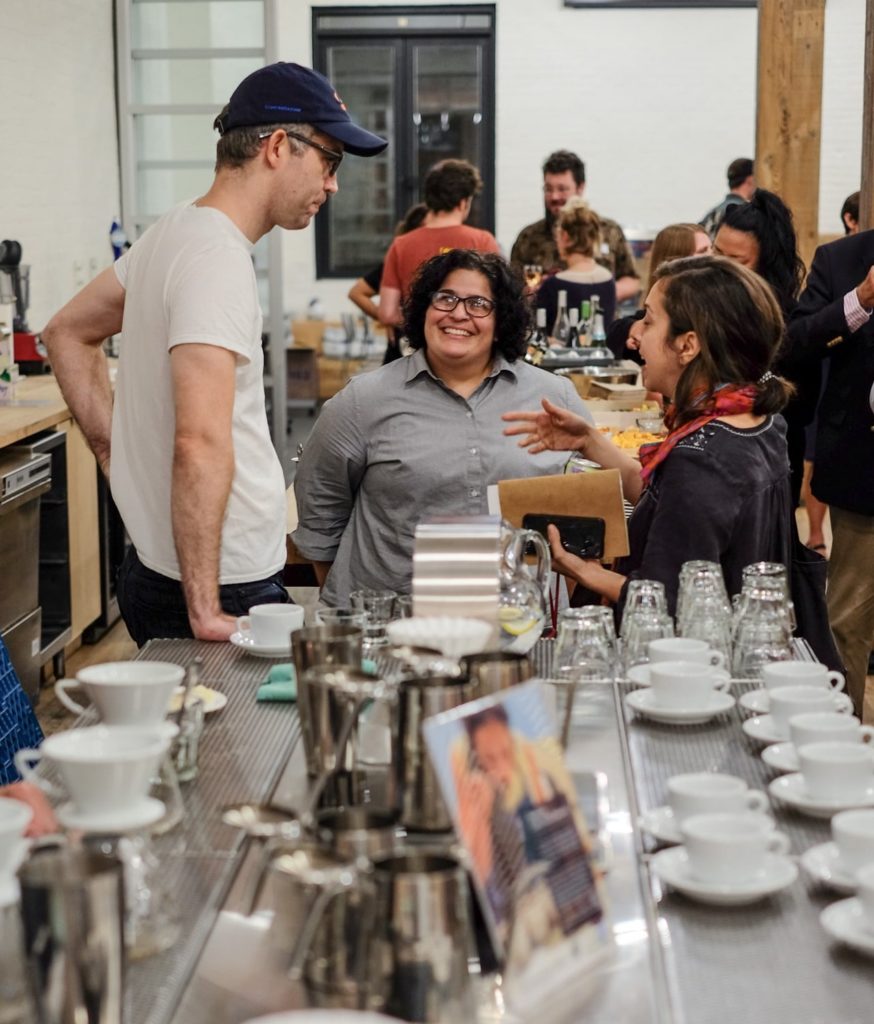 —
Victoria Brown is the QC Intern at IAC’s Providence office. While new to the world of coffee, she studied food history and food policy at Sarah Lawrence College. In her spare time she enjoys reading, knitting, drawing and cooking. Her full portfolio can be found here.