As I set off to write this post, I naively googled “umami.” Three whirlwind umami-research days later, I headed to the grocery store to pick up ingredients for a sensory exercise that would revolve around tasting tomato products.

You may ask: What is a sensory exercise? It’s essentially a small tasting, often featuring foods and spices that appear frequently in coffee. We have adopted this practice in the Providence office as a way to constantly deepen our personal sensory lexicons. With a wider library of tastes, smells and textures, we can more accurately score coffees and relay tasting notes.  (You can read more about interoffice calibrations here.)

Another fitting question might be: What is umami? Umami is widely recognized as the fifth taste, alongside salty, sweet, bitter and sour. (If you haven’t read the post about our sensory event a few weeks ago, I encourage you to check it out!)

Even those of us who think we know a fair bit about umami might be surprised—a few web searches later—to realize how much more there is to learn.

While the other four senses were officially “discovered” early in the history of human thought—Democritus (460–370 BCE) hypothesized that these four tastes were produced by four different shapes of atoms—umami wasn’t discovered until the 19th century by the Japanese scientist Kikunae Ikeda.

After a long day at work in 1908, Ikeda went home and enjoyed a bowl of ramen soup made by his wife. Fascinated by the full and savory taste of the broth, Ikeda asked his wife how she made it. She showed him the kombu she used, a kind of seaweed prepared by boiling its dried form in water to extract the taste. Deeply engrossed over the next few months, Ikeda used his biology training to extract a white crystalline substance from the kombu. Later called glutamate, Ikeda realized that the powder he isolated from kombu was the essence of the fifth taste. He named this taste umami, after the Japanese word for deliciousness.

Glutamates are the most common of the 20 amino acids that make up proteins. Just as sugary foods taste good because they indicate the presence of caloric density, glutamates, which are broken down to glutamic acid inside our bodies, signal to our brains that we're eating a food rich in protein: a good survival mechanism. 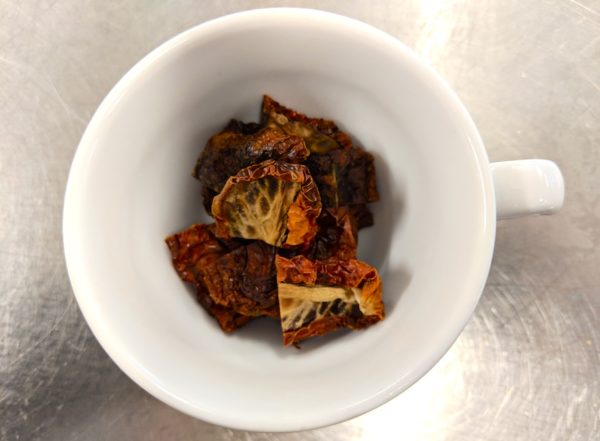 Among the samples, the umami flavor seemed most pronounced in tomato paste and sun-dried tomatoes in olive oil.

Glutamates are naturally occurring substances that appear in all kinds of foods, from Parmesan cheese (which has the largest amount of naturally occurring glutamate of any food) to Marmite and potatoes. Even human breastmilk has glutamate—10 times the amount found in cow’s milk! Glutamate can also be synthetically produced and is best known as mono-sodium glutamate, or MSG. However, MSG also hides under a variety of other names including “yeast extract,” “hydrolyzed protein,” “soy protein” and many others.

MSG has long been a boogeyman of food additives that many ascribe as the cause of headaches, tingling sensations and many other symptoms, commonly associated with eating American-Chinese food. But there have been no definitive studies demonstrating that MSG is bad for you. As the great food writer Jeffrey Steingarten reasoned in a 1999 Vogue article, “If MSG is bad for you, why doesn’t everyone in Asia have a headache?” By the same argument, anyone eating Parmesan and tomatoes might suffer headaches as well.

In Western culture, we are better practiced in deciphering the other four tastes.  This is also true for coffee professionals. Umami can, in any food, be more difficult to pin down than other tastes. What does umami taste like? Some of the best examples of umami can be found in junk food. Doritos and Cheetos both have very high levels of MSG. When you bite into a Dorito and it tastes somehow meaty—like there’s more there than just the sum of the ingredients—that’s the umami talking.

For our sensory exercise, we set off on a tomato-tasting adventure to pin down that elusive umami taste. We tasted cherry tomatoes, beefsteak tomatoes, sun-dried tomatoes (plain and in oil), stewed tomatoes, tomato paste and tomato juice at two temperatures. We reached a consensus that the umami flavor seemed most pronounced in the tomato paste and the sundried tomatoes in olive oil. This makes intuitive sense, because both products are concentrated versions of an ordinary tomato. When much of the water is removed, we taste the sugars, salts, acids and glutamates more intensely.

We also noticed that the cherry tomato tasted more umami than the beefsteak. Again, this could be due to the more concentrated taste of a cherry tomato, since beefsteaks hold more water. When we tasted the tomato juice—which some of us loved and others despised—we agreed that the colder juice tasted more acidic, more full and more umami than the hot one.

After this experience, we return to the cupping table with a better sense of the subtle umami notes present in our cups. •

All coffee has some amount of natural glutamate in it, but some coffees taste richer and more umami than others. Here are our traders’ top picks for umami-forward coffees:

If you’d like plunge further into the story of umami, some resources to get you started include:

• this great podcast by the Masters of Social Gastronomy about the controversy and history of MSG in foods.

• these articles from Experience Life, The Art of Eating and The New Yorker.

•these coffee-world articles from Perfect Daily Grind and GSR Magazine.

• and this site on how to cook with umami.

—
Victoria Brown is the QC Intern at IAC’s Providence office. While new to the world of coffee, she studied food history and food policy at Sarah Lawrence College. In her spare time she enjoys reading, knitting, drawing and cooking. Her full portfolio can be found here.