Kenya is now the fourth country in which the NKG BLOOM initiative has been implemented. We’re excited to share that coffees from producers enrolled in the program are now available for purchase, and fresh-crop Kenya NKG BLOOM Nguvu will arrive around March 2022. Recently, we spoke with Nicholas Kabare, the Farmer Services Unit manager in charge of the NKG BLOOM implementation within Tropical Farm Management (a Neumann Kaffee Gruppe (NKG) coffee marketing agency) about what the initiative entails, its challenges and what he’s most excited for.

In Kenya, the coffee industry is complicated and fascinating and certainly never dull. Government regulations require coffee cooperatives and estates to sell their parchment through “marketing agencies” — companies that represent coffees at auction or sell directly to international coffee buyers on the cooperatives’ behalf, with export companies assisting in the logistics. By law, contracts with marketing agencies last only one year — the hope being that the agencies remain incentivized to continually offer excellent service.

Kenya is now the fourth country in which NKG BLOOM has been deployed, and this unique country detail — the reality of rolling out a multi-year effort to cooperatives only able to commit to one-year relationships — both posed a challenge and offered a further enticement.

“There are a lot of things we have to deal with,” Nicholas Kabare, manager of Tropical’s Farmers Services Unit, says good-naturedly. “But I always say that we cannot promise we will retain 100 percent of the cooperatives that are working with NKG BLOOM, but we can say with a lot of confidence that we’ll always have 80 percent of them.”

Currently, 36 full-time agronomists have been hired as part of the NKG BLOOM Kenya effort, and they’re reaching more than 60,000 farmers. Early this year, the agronomists received motorbikes, to help them visit more farmers more easily.

“With NKG BLOOM, technical field officers are attached to each cooperative, based on the size of the cooperative. A cooperative with three or fewer pulping stations have one field officer, and that is creating a lot of excitement,” says Nicholas. 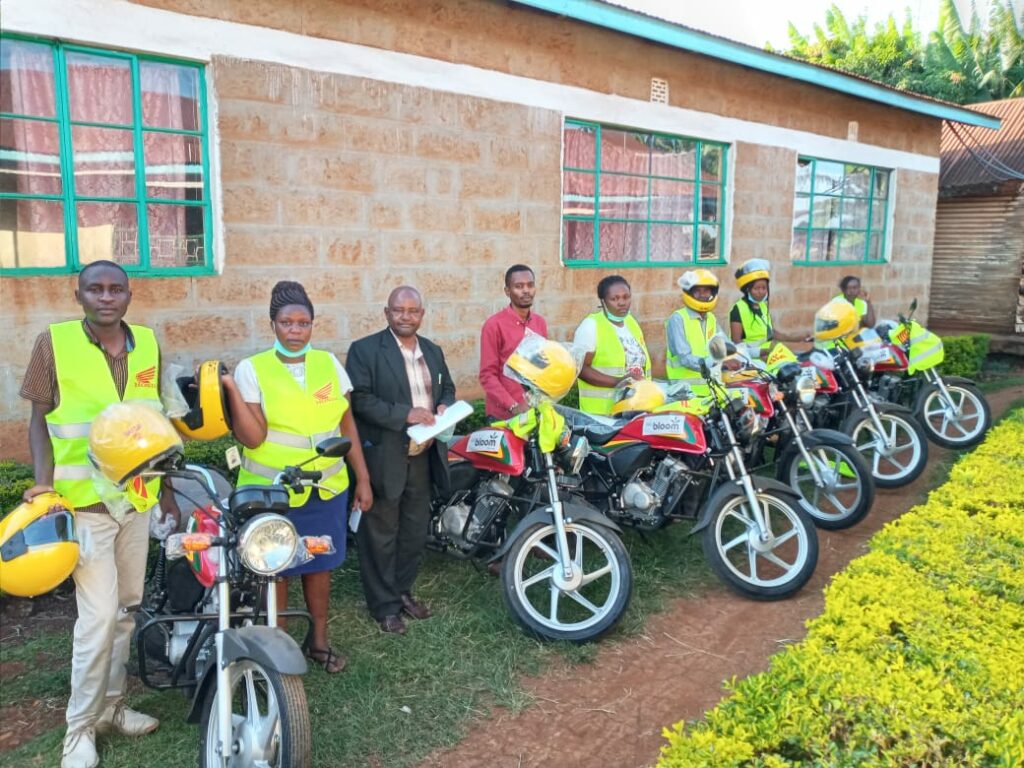 “They are our ambassadors on the ground,” he continues, “so it’s important they represent us well by offering good services. So, when we talk to the farmers, we’re able to tell them: ‘We don’t just want to market your coffees, we want to help you produce more, and better-quality, coffee. That’s why we’ve sent a technical officer. And in addition to the recommendations and the trainings, we support the officers by making sure there is financing available if you want to borrow, that inputs are available, that credit can be organized.’ So, the producers know all these things are there for them.’”

Broadly speaking, the NKG BLOOM program in Kenya offers a service package that may be summarized as 6 efforts.

The first is the trained technical services team on the ground, able to provide trainings to farmers.

“For example, we have soil scanners that can scan the soil and give the results immediately, with recommendations,” Nicholas explains. “One of the trainings is so the field techs are able to interpret the results and offer recommendations to farmers on the fertilizer that needs to be applied based on what is available in the locality.”

The second is supporting cooperatives in their efforts to meet sustainability goals and certification criteria. As a baseline, all cooperatives will be helped to meet NKG BLOOM social and environmental criteria. Then, based on the co-ops’ desires and the market’s demands, they can be assisted in meeting certification standards. Of the 12 cooperatives currently in the NKG BLOOM program, two have Rainforest Alliance certification and two are Fairtrade certified. (These could be available with the expected additional premiums.)

“The third effort is, we are helping to improve the factories’ infrastructure,” explains Nicholas. “We are helping them innovate their drying tables, changing them to more permanent metallic tables, as well as updating coffee-washing channels. Where we have made repairs and put tiles, we’ve seen improvements in quality. So, we’ll be doing more of this based on the availability of funds.”

The fourth effort is financing — short term, medium term and long-term support are all available to every farmer enrolled in NKG BLOOM. Though in Kenya, industry regulations determine the amounts that marketing agents can lend to co-ops.

The fifth is access to inputs and seedlings. “We are establishing nurseries that will produce easier access to seedlings,” says Nicholas. “We intend to produce seedlings not only for coffee but for other choice diversification crops, to make sure farmers are also food secure.” 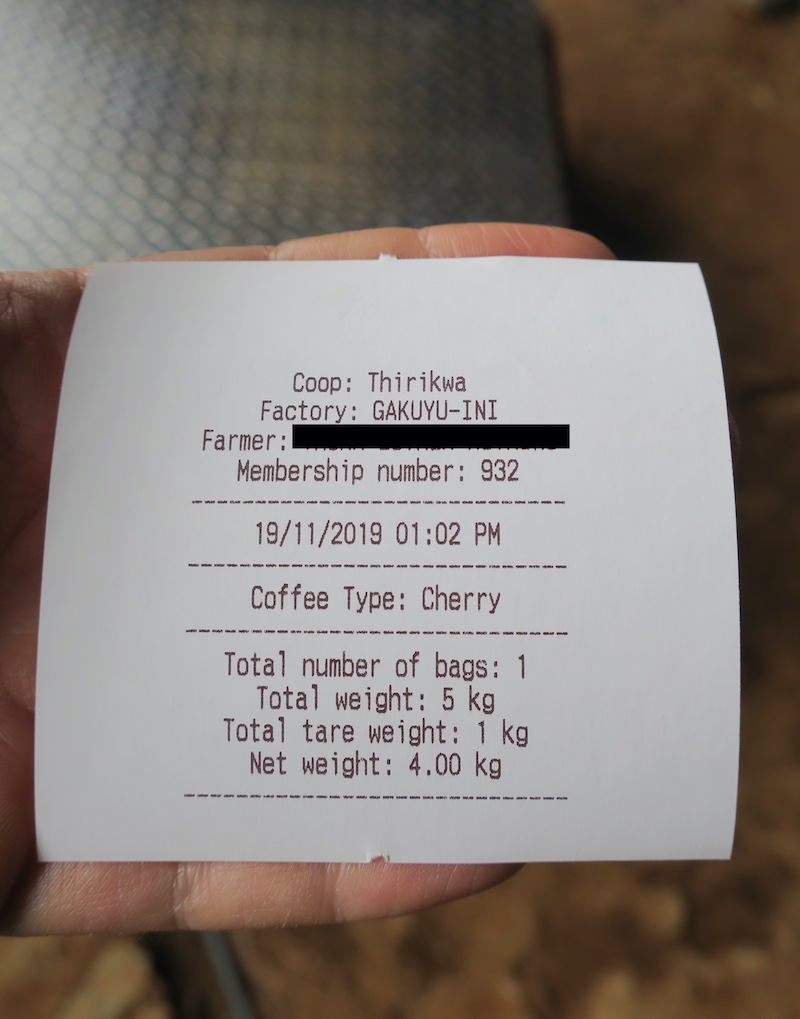 Finally, the sixth effort is a cooperative digital management system. Still in the pilot phase, the software — which works with even simple mobile phones, digitizes the transactions, offering receipts, instant information and searchable records. These are coupled with digital scales that that have been provided to weigh the coffee cherry deliveries from famers.

“It was very complicated to figure out how much the payout would be and to calculate, with a handheld calculator, how much coffee each individual had delivered,” he explains. “This is really a revolution. It used to take weeks, and now with just a few clicks, it’s done. It’s really changing the efficiency of the cooperatives themselves.”

When asked what excites him about NKG BLOOM, Nicholas has a quick answer.

“I’m excited that within the next two or three years the cooperatives we’re working with will be able to increase their production by 50 percent, if not double it — just by making sure they have the right trainings and making sure they’re following the agronomic trainings the way they’re supposed to be done,” he explains.

“The average production of Kenyan coffee is between 300 and 600 kilograms per hectare — the good farmers produce 600, the [farmers not giving attention to their soil and plants] produce 300. Our conservative assessment shows us it’s possible to move that 600 to between 900 and 1,200 without a lot of effort — just with the little things we’re doing on the ground, with agronomy training and good soil management, thanks to the soil-scanning technology.

He adds that increases in production aren’t always exactly equal to increases in income, due to the vast fluctuations in coffee prices in Kenya. That said, the increases in cup quality that are following from the agronomy trainings are further working in the farmers’ favor.

Still more reason for excitement? The rollout of NKG BLOOM Kenya from March 2019 through May 2021 received generous support from a USAID program implemented by Fintrac. Early this year, says Nicholas, “we were fortunate to be successful in our bid for the AgriFi Challenge Fund, which will further support the program from April 2021 to March 2023.” •

—
To learn more about NKG BLOOM, please visit www.nkgbloom.coffee and follow us on Instagram. Please also note that our current Kenya Nguvu lots are not considered NKG BLOOM coffee. While these lots come from the same producers, the initiative and its service offerings were not yet fully deployed while the coffees were being produced. NKG BLOOM coffees will be clearly labeled (and celebrated!) and such.

Top photo: Priscilla Wanjiru Ndungu and her husband, Joseph Ndungu Njoroge, are participants in the NKG BLOOM program. Last year they produced 1,850 kgs of cherry; after following the recommendations of NKG BLOOM agronomists, their yields this year are expected to exceed 3,000 kgs.